A few weeks ago, when information about the National Security Agency’s (U.S.) phone surveillance program surfaced, the U.S. President Obama was quick to announce that “nobody is listening to your telephone calls”. It was rather a little “harmless” system that collected metadata about individuals’ phone calls.

Ad targeting in Gmail is fully automated, and no humans read your email or Google Account information in order to show you advertisements or related information.

So no peeping tom is reading your e-mails, Google says. And that should be enough to comfort you about the privacy of your e-mails. Or is it?

The problem is, often, metadata says more about an individual than once can ever imagine. As EFF has recently put it, it may even say more about a person than the actual content of a phone call (or an e-mail):

Sorry, your phone records—oops, “so-called metadata”—can reveal a lot more about the content of your calls than the government is implying. Metadata provides enough context to know some of the most intimate details of your lives.  And the government has given no assurances that this data will never be correlated with other easily obtained data. They may start out with just a phone number, but a reverse telephone directory is not hard to find. Given the public positions the government has taken on location information, it would be no surprise if they include location information demands in Section 215 orders for metadata.

However, as I said, it may often be very difficult to imagine what your communication metadata says about you. And the good folks at MIT come to the rescue. They created a very simple visualization tool that demonstrates how companies or the government can make inferences about your relationships based on your contacts in e-mail. The tool is called Immersion.

You can link your Gmail accounts to MIT’s “Immersion” tool here and see what comes up.

Mine is below (contacts anonymized, of course) 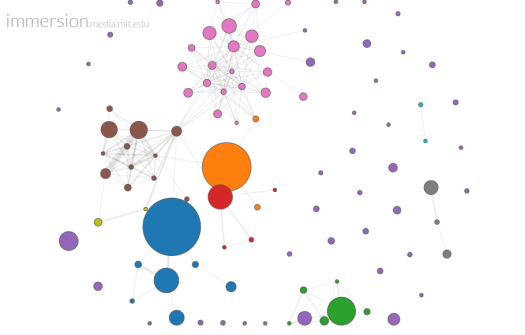